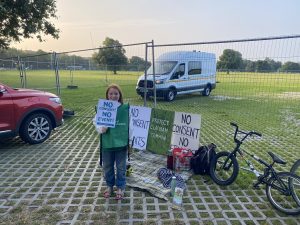 A cheerful brigade of locals and their children and dogs set up picnic on one of the most popular grassy areas of Clapham Common on Monday August 16th. They are fighting to stop the Council breaking the law and exploiting this treasured public space commercially.

The protesters’ action coincided with the latest attempt by Lambeth Council to fence off a large area of iconic Clapham Common for paying visitors only. The protesters were peaceful and exercising their lawful right of free access.

Lambeth Council has decided to have fences erected and allow the selling of entry to the space for a festival over the August bank holiday weekend. It intends to enclose it from August 16 until September 9th. Some 120,000 high-value tickets are being sold for a music festival inside the fencing. The area will be closed off to the hundreds of thousands of Londoners who enjoy the space every day.

Locals who use the Common are fed up with the area being trashed each year by huge commercial events. Past events have resulted in the area being closed off for months on end to repair the damage.

There has been so much damage to the ground from Lambeth Council’s commercialisation over previous years that the Council had to spend over £200,000 trying to reseed the grass just this year. The whole area was fenced off for months from September 2020 until June 2021 to try to let it recover.

The grass is still fragile and will not withstand the trampling of 40,000 music festival visitors per day planned over the August Bank Holiday weekend, let alone the huge stages, marquees, lighting rigs and amenity blocks that will need to be erected along with the heavy vehicles and machinery needed to install the structures.

It seems certain that the whole area will have to be fenced off again to recover. Lambeth Council has entered a five- year deal with Festival Republic and locals fear the terrible cycle of destruction and enclosure will continue unless stopped.

Because common land has special protected status, the Council has to get permission from the Secretary of State for the Environment before allowing events like this to go ahead. It has not got permission. The Environment Secretary has yet to conclude considering the case. By law, only he can weigh up the interests of the public vs Lambeth Council’s money-making proposals. He received hundreds of objections to the events. Incredibly, Lambeth Council seems determined to go ahead anyway and break the law. It hopes to be let off later.

Many hundreds of thousands of local people depend on the open grassy space, not just for a brief moment of entertainment but day in day out all year for their wellbeing, more so than ever in this time of Covid. Campaigners say that it is the rights of these local people that are being trampled over.

The Friends of Clapham Common, which has over 1,000 members, with the support of another local amenity group, The Clapham Society has written a series of legal letters to the Council pointing out its illegal behaviour. They have been fundraising via https://ourcommon.co.uk/  to take the Council to court if necessary. An online petition calling for Lambeth to stop exploiting the Common for commercial gain recently received over 3,000 signatures.

“The flagrant breach of law by Lambeth Council is astonishing. We are determined to use the Courts to hold them to account. We would urge campaigners who work to protect their local Commons to join us in our fight.”

If Lambeth is allowed to go ahead without legal consent it will set a dangerous precedent, campaigners fear, allowing other Councils to exploit their common land for profit.

Campaigners have not yet received a formal response from Lambeth Council setting out the legal basis on which it intends to go ahead.